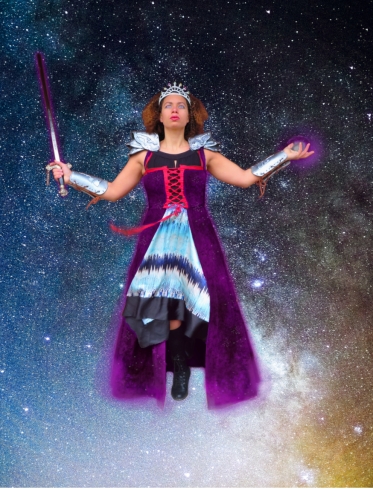 I’m so excited to see everyone here, and to present you with my review of Dreamer! (It’s also posted on Goodreads, so be sure to head over there and add the book to your “want-to-read” shelves.)

I first came across Ja-Mel Vinson because of his ARC unboxing video that popped up in my twitter feed, and his genuine excitement and enthusiasm about his story caught my interest.

Guys… Dreamer ARCs just came in… it’s real. My book’s real. I didn’t have anyone that could record my reaction, but I think my voice says it all. pic.twitter.com/7mcr3ZIQrW

I also thought the cover was really neat and conveyed an air of mystery and wonder, so when an opportunity came along to review Vinson’s novel, I jumped at the chance. I feel that reading this book has given me a better understanding of Vinson’s brand as an author, and re-introduced me to a genre I’d almost forgotten about.

You may have noticed the picture that accompanies this review – in one of my livetweets from my reading sessions, I said that I hoped people would be eager to cosplay Vinson’s characters, and since I dabble a bit in the art myself, I thought I might as well lead the charge on that one. I had a lot of fun putting this together, so without further ado, let’s get to my thoughts about Dreamer.

**Note: I received an ARC for this blog tour that in no way influenced my honest review**

“Dreamer” tells the story of Maya, a young adult whose troubling dreams begin to unfold in reality just as she embarks on her college adventures. Soon she discovers long buried secrets and a host of dangers that affect the lives of everyone she cares about, and in the middle of it all is the mysterious Lucent, whom Maya feels strongly compelled toward, for reasons she doesn’t understand.

I did like this novel. The opening of the story definitely grabbed my attention, and though I’m not a huge fan of first person POV, in this case that actually helped me to sink into Maya’s perspective and really believe the story was being told by a young lady and not the male author.

For the first six or so chapters, I had a hard time connecting with the story, particularly because of the rather high stakes presented with very little build up, but when the corset dresses were introduced, things began to click into place for me, and I realised that with its large cast of strong female characters, sparkly transformative powers, and animal companions that are more than they seem that “Dreamer” falls into the same category as “Cardcaptor Sakura,” “Tokyo Mew Mew,” or “Sailor Moon.” I felt like I was reading an anime in novel form, and that was only reinforced more and more as the book went along. Once I was able to visualise the novel in that way, the rest of the book made a lot more sense, as the storytelling tropes and plot devices of the genre sometimes referred to as “magical girl anime” rely on a set of very different rules that are not typical to your average western YA novel.

I very much enjoyed all the strong friendships the characters have, and the underlying mystery surrounding Lucent helps drive the story and keep it interesting. There are a few big plot twists and key events that Vinson pulled off nicely, and the way “Dreamer” ended was quite well done. For a story that foreshadowed rather a lot, and explained even more, I still found myself pleasantly surprised that I hadn’t quite predicted how everything would turn out.

Another aspect I enjoyed was the writing. “Dreamer” has good, clear prose interspersed with more poetic lines that demand attention without tipping into purple prose. It’s very easy to imagine what the characters look like, and my favourite bit of description comes from Chapter 10:

“The moon moved with its star-servants but remained higher and closer and larger to the eye. Atop its stellar seat, it commanded attention while clouds grew and shrank like animals bound by a leash. The moon was the ringleader, wielding power over everything, presumably even the bestial and elongated vapors that drifted ahead of it.”

(As an aside, having read the story, the cover is very symbolic of quite a few different events that happen, and I can see why Vinson is so thrilled with it.)

Now, the world of Dreamer is similar to ours, but also quite different, with a large set of internal rules and in-depth history, and because of this, there is a lot of exposition to explain how everything works. At times this really slowed the pace of the story, and dragged out scenes longer than they needed to be. At some points, explanations are included very organically in the story, through training sessions, or information presented in class through learning games, but at other times, the story would be progressing, a new element would be introduced, the plot would pause as Maya reflected on it, and then the story would resume. For me, this resulted in uneven pacing that lacked urgency, especially when new expositional information continued to be introduced near the end of the story.

Overall pacing was also a little stilted, and I felt like the story really began once we reached chapter 12, which made the preceding chapters feel like backstory, or at least story arcs that could have been told at a later point to preserve the forward motion of the narrative. (Not that the novel ever came to a standstill, but sometimes I felt as if it were in slow motion.) I often felt that I was waiting for the plot to really kick in. Because of this, my actual rating for “Dreamer” comes to a 3.5, although I am giving it 4 stars since I don’t believe the quality of the novel merits only a 3, and there’s no option for including half star ratings.

All in all, I think this book is something 14-16 year me would have loved, given my (somewhat concerning) obsession with anything anime at the time, and I don’t doubt that other teens and young adults will enjoy it and relate to the characters and their friendships and conflicts. I’m looking forward to what Vinson produces next, and believe that his storycrafting can only continue to advance.

See all my reviews 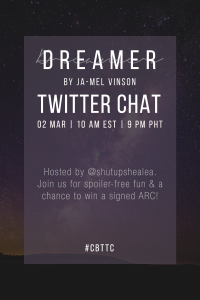 So there you have it, my review of Dreamer by Ja-Mel Vinson. I wish him much success with the launch of his debut novel, and many thanks to Shealea for making this whole blog tour experience very smooth and easy to navigate. (Launch post and other bloggers on the tour here.)

Don’t forget to join in on twitter March 2nd, 2019 for a live chat regarding Dreamer, and a chance to win a signed ARC of the novel!